2021 began on a positive note for The Equal Hue Project. During the last week of January, as part of the second phase of The Equal Hue Project, we kicked off the first of our series of closed-door discussions with stakeholders on the challenges and possible solutions to the key issues affecting women’s cricket in India. This consultative series will culminate in a concise Charter of Reforms that takes into consideration all of the data, opinions and suggestions that we have gathered and will aim to lay out a clear roadmap for reform.

Our first session focussed on the ‘Barriers to Participation’ that girls in India face while trying to embark on a sporting journey. This report captures the main points of discussion and possible ways forward which could aid in increasing women’s participation in cricket. The participants for the session included current and former Indian women’s cricketers & their families, coaches and sports journalists. The session consisted of nine participants. Since these are intended to be closed-door discussions, the names of the participants have been withheld from this report and views expressed during the session have not been attributed to any particular individual.

The key heads under which ‘Barriers to Participation’ were discussed were:

ALSO READ: Our graphic report of the Barriers to Participation round table conversation

While the athletes present at the session revealed that their parents had been very supportive of their cricketing journeys, they mentioned that their experiences were unique and not the norm. Most families are generally fine with girls playing recreational cricket; however, they aren’t comfortable with their daughters progressing to competitive cricket. The main reason for this is the requirement to travel long distances to train in academies and participate in tournaments and the safety concerns that entails. This was identified as one of the main reasons that leads girls to drop out of the sport.

Athletes and their families also cited social pressures from extended family as a concern. Families tend to raise questions on the need for a girl to play cricket competitively in a country like India where cricket is considered to be a predominantly male sport.

Even for girls whose parents were supportive, external factors such as an unsupportive school environment and scepticism about women’s cricket by the sporting fraternity and the larger society were raised as concerns.

However, one positive that was reported was that since the 2017 ICC Women’s World Cup where the Indian team finished as runners-up, coaching academies have seen an upswing in enrolment of girls with some parents’ keen on enrolling girls as young as 2 years to get a head start on their cricketing journeys. Through social media channels like Instagram and Facebook, girls who are interested in playing the sport have also started making direct enquiries with coaches through their social media handles and enrolling themselves into cricket coaching classes, an avenue which was not available earlier.

While initially, parents do express an apprehension regarding their daughters playing cricket and mingling with boys, they are usually willing to let go of their reservations once they understand that cricket is a non-contact sport. Parents also understand that playing along side boys helps girls improve their game, understand their abilities and enhance their skills. However, a survey conducted by one coaching academy revealed that parents by and large preferred enrolling their daughters in an all-girls academy.

In order to balance these conflicts and in order to improve participation of girls at the entry-level, it may be better to encourage all girls’ teams initially to cross the first hurdle of bringing girls onto the cricketing field and slowly as parents and girls become more comfortable encourage them to practise with boys.

Currently, in India the main avenues for competitive women’s cricket are the BCCI national and international level tournaments and sporadic tournaments organised on an ad-hoc basis. This is a key concern since it highlights the stark reality, that there aren’t enough avenues for women to play competitive cricket. Every state in India, shortlists approximately thirty (30) probables each year for the state team, out of which fifteen (15) women get the chance to play for the state side, the other fifteen (15) are left with few opportunities to play competitive cricket.

Participants reiterated the need for more matches at a competitive level to give more exposure to girls and help them hone their cricketing skills. There are limited opportunities available for women to play across the board whether it is at the senior level: the Indian women’s national team has played only the Women’s T-20 Challenge in the last year, U-23 or U-19 level. There are no avenues for club cricket, U-16 cricket and inter-school cricket. As a result, there are scant opportunities for women to play cricket even if they have the talent and are selected to represent the national side. If they don’t get selected, they have even fewer avenues to hone their skills and improve their game.

Limited playing opportunities are also the main reason for girls dropping out from the sport. If they don’t get selected for their state or the national side, girls tend to give up on their cricketing journeys and move on to other avenues. This is a huge loss, since some of those who leave may have in fact been late bloomers, who with the right amount of exposure, practise and supportive environment may have gone on to represent the country eventually.

Athletes reported that one of the major safety concerns and one of the times they felt most vulnerable was while using public transport for travel to academies or for tournaments. Each of them reported facing unpleasant situations while travelling alone and faced harassment in some form or the other. This is especially concerning given that most of the time young girls travel long distances alone to attend coaching classes or to play tournaments. At the age of 10 or 11 they may not even have an understanding of what constitutes safe or unsafe behaviour. One of the athletes recounted seeing a groundsman misbehaving with a 10 year old girl who was too young to understand that the behaviour was inappropriate.

Even if one manages to surmount the transport issue and makes it to the academy or tournament, they find that there are inadequate facilities available for girls. Athletes reported lack of changing rooms and toilets for girls.

Athletes were supportive of having a seminar at the start of each season or the start of each coaching year to educate athletes, parents and coaches of appropriate and inappropriate behaviour, what constitutes sexual harassment, guidelines against sexual harassment, mechanisms for anonymous reporting and remedies available. These could be organised across the board for both boys and girls. Athletes especially stressed the need for having mechanisms in place for anonymous reporting without fear of backlash and having a supportive environment where they could voice their concerns freely without being shut down or being told to deal with the issue as a part of life.

The approximate cost for an athlete to start playing cricket is Rs. 15,000 for cricketing gear such as helmet, bat, shoes, spikes, pads etc., and an additional monthly coaching fee of Rs. 2,000 per month. This cost is prohibitive for most Indian parents. Athletes mentioned that while most parents are supportive of their girls playing recreational tennis ball cricket, they aren’t inclined to help them pursue the game at a competitive level because of the expenses involved. A number of girls drop out of the game due to insufficient financial support.

Coaches recounted that even at their academies most girls either used borrowed cricketing gear from friends or used the academy’s common gear. Due to Covid-19, sharing of gear is discouraged which has led to potentially more girls dropping out of the sport. While academies do provide scholarship programs to upcoming students who may not have the means to support their game, they can only offer such funding on an ad-hoc basis to a few athletes. Most academies receive no financial support and are entirely dependent on the coaching fees they receive.

One athlete mentioned that the joy her family felt when she secured a job with Railways far outweighed the joy they felt when they saw her represent India for the first time. The Railways job meant more to her family since it meant that she could take care of her own sporting expenses as well as be assured of some degree of financial security.

The situation for women does not improve as they progress to higher levels of the game. Due to the lack of tournaments and job opportunities even state and international cricketers, barring a few, struggle financially. As of now, only the Indian Railways offers jobs to female cricketers, because they are the only ones who are allowed to field a team in domestic cricket. Cricketers who have managed to secure a job with the Railways are the only ones who are able to fund their sporting expenses independently, the rest are forced to depend on their families for support.

At the elite level, one also has to incur additional costs for support staff such as a dietician, nutritionist, physiotherapist etc., all of which when added up can amount to a significant expense which not every athlete’s family may have the capacity to bear. This is also the stage where most athletes start thinking of dropping out of the sport and pursing other opportunities. In fact, one athlete mentioned that the joy her family felt when she secured a job with Railways far outweighed the joy they felt when they saw her represent India for the first time. The Railways job meant more to her family since it meant that she could take care of her own sporting expenses as well as be assured of some degree of financial security.

This can be especially deflating for younger athletes who are just starting out. If they see the senior national and international cricketers struggling financially, they have no role models to aspire to emulate. This is in contrast to young boys who can aspire to secure a lucrative IPL contract.

At the end of the discussion, a few points emerged as priority concerns which if dealt with could increase women’s participation tremendously. These were, 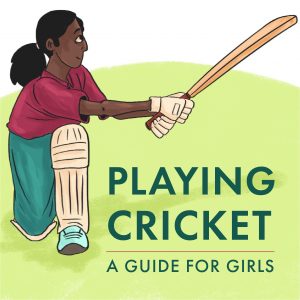